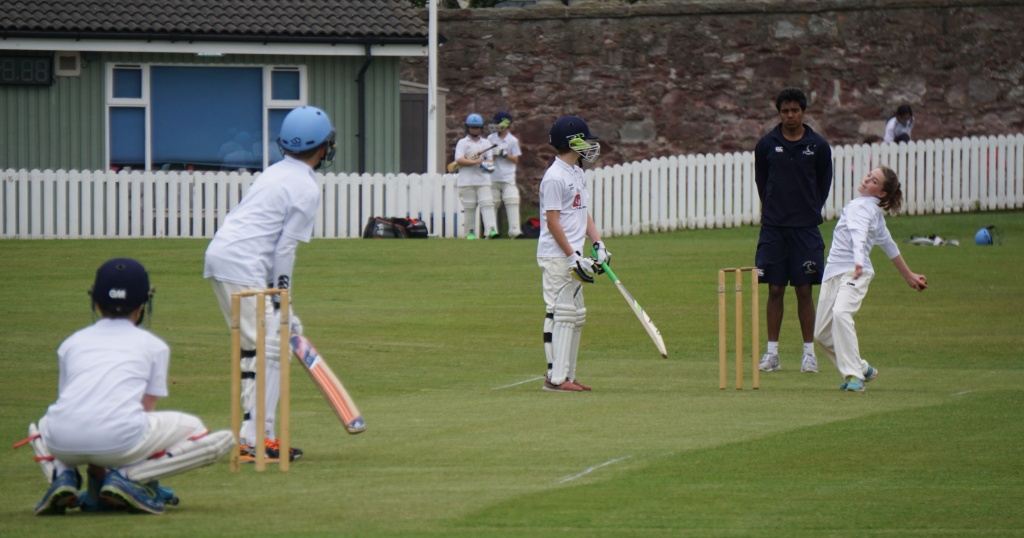 Junior cricket at Carlton can sometimes appear confusing; we run a lot of junior teams, ranging in age from 7-year-olds taking their first steps in the game to 16-year-olds who are already also regulars in our senior teams.  This page describes the progression through the various age groups.

Timetable of training sessions and matches

The Primary School Sessions occasionally switch from Wednesday to Monday to allow the U16 team to play some home games at Grange Loan. These switches will be advertised well in advance.

Much of the cricket we play is based on age groups.  Ages are as of 1 September the preceding year, so to play Under-12 cricket in the summer of 2021, a player must be under 12 on 1 September 2020.

We have girls’ and women’s teams at various levels depending on the level of interest (more details below).

Throughout their time at Carlton, girls are also encouraged to play alongside boys for all the junior and senior teams.  Girls playing for mixed age-group teams can play a year longer than boys, so to play Under-12 cricket in the summer of 2021, girls must be under 12 on 1 September 2021.

All junior players will join a weekly training session at Grange Loan. They run from after the Easter Holidays to the last week in August – including throughout the summer holidays.

Players will be told at the start of the season which training session they should join.  The full training Timetable is above.

Junior matches take place through the season from the end of April until the end of August, with a 4 week break in July.

Each team has a manager and an administrator, who are usually parents of players, and are members of the junior committee. They are usually supported by one of the club’s coaches.

Players are asked to arrive 30 minutes before the match start time. When we’re playing a home game, players are expected to help set up the pitch and to clear up at the end of the match.  Due to the number of teams at Carlton, some “home” games will be at a different ground.

Match days are in the Timetable above.  Matches last approximately 2½ hours, although the exact length is somewhat unpredictable.

We also enter teams in the U14 and U16 Scottish Cups and the U13 and U15 ECB qualifying cups (which feed into the English national competition).

Junior fixtures and match reports can be found on the Fixtures  and News pages.

Carlton Cubs provides an 8-week introduction to cricket Friday evenings in May/June for P1 and P2 players to try the game.  Players learn the basics of batting, bowling, fielding and – above all – having fun.  There are no matches for this age group. Primary school players start from 6 or 7 years old.  The first introduction to cricket matches is Kwik Cricket, a simple and fast-moving version of the game with plastic balls and bats.

Kwik Cricketers play tournaments through the summer, featuring many other clubs from Edinburgh and further afield.  Most Kwik cricket tournaments are for Under-10s, although some Borders clubs host Under-12 tournaments.

Players progress from Kwik Cricket to hardball, typically aged about 10 or 11, although the age when a child is ready for that move varies greatly between 9 and 13 as individuals develop at different ages, and this is a judgement made by the Head Coach and Junior Cricket Manager.

The first taste of competitive hardball cricket for many is the Carlton Primary School Team. Junior cricketers who attend Council run primary schools are invited into the team squad and there are a number of fixtures in May & June against local Independent schools. Match formats vary and selection for a match is based on availability, ability and the standard of the opposition.  Match times are generally Friday afternoons or Saturday mornings but can also be midweek during the school day.

Any girl who plays hardball cricket at Carlton is a member of the girls’ hardball squad.

Girls are also encouraged to join the women’s hardball squad when they reach a suitable standard, determined by the Women’s Head Coach.

Hardball players are invited to join their age-group squads.  We enter teams in leagues organised by Edinburgh & Lothians Cricket, and we play matches throughout the summer.  Depending on their availability, players in league squads can expect to play roughly the same number of matches as each other.  We do our best to have every player playing every match for which they are available, but sometimes we have to ask players to sit a week out.

Throughout the season, there are plenty of opportunities for players to get a taste for the older age-grade teams.  Under-12s for example are frequently invited to substitute for the under-14 teams; similarly under-14s often find themselves playing under-16.

We also enter teams in:

Cup matches take place throughout the season.  How late they go into the summer depends entirely on how well the teams perform!  In a good year, this can include trips into England to play the winners of county competitions in the ECB cup.

Selection for cup squads is made by the Head Coach and Junior Cricket Manager, and is based on a range of factors including player availability, ability, attitude, attendance at training and team balance.

Many juniors also play for our senior teams.  The first experience for most will be playing for one of:

Both teams comprise a blend of wizened experience and youthful enthusiasm.  These two teams exist almost entirely to introduce junior players to senior cricket; the senior players’ role is to guide the juniors through the step up to 40-over league matches.  At this level, bowling a spell of 4-6 overs is commonplace, and it is rare indeed for all junior players not to bat.

The coaches will advise junior players when they should join one of these teams.  As a very rough guideline, most players move into this introductory level of senior cricket while also playing for the under-14s.