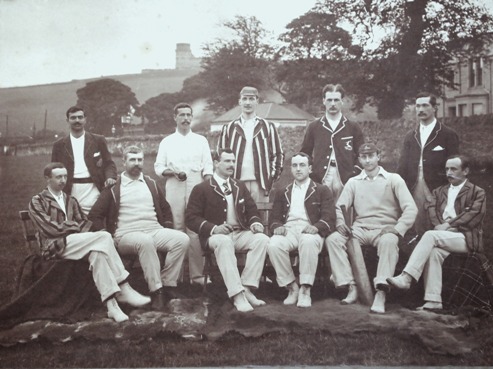 Carlton Cricket club was founded in 1863 when four members of Edinburgh ‘s Young Men’s Christian Association were expelled for putting on a dramatic performance. The four men then formed the St. Bernard’s Literary and Debating Society which became very popular in Edinburgh circles. Searching for summer activities, the society founded the Carlton Cricket Club, named after London ‘s Tory-dominated Carlton Club. Typically, the club’s colours were chosen to be Oxford and Cambridge blues.

Carlton ‘s fixture list was expanding, with matches against other Edinburgh sides and against Perthshire, Dunfermline, Greenock , West of Scotland and many more. It was a match between the United South of England and the Gentlemen of Edinburgh, organised by Carlton, that was to prove the most significant. Not only was this Dr. W. G Grace’s first match in Scotland (he scored only 25 runs in two innings), but with over 3,000 paying spectators, Carlton ‘s finances were put on a sound footing.

In 1879 the Scottish Cricket Union (now CricketScotland) was established, with Carlton one of 25 founder members. In the latter part of the 19th century Carlton ‘s fortunes fluctuated, but by 1900, the club had an excellent side, with one of its players, George Jupp, dominating the Scottish game. He played regularly for the Scotland side as a stroke-playing batsman and slip-fielder, and a master of the end-of-over quick single to retain the strike.

Many strange things have happened on a cricket pitch, but none more so than when Carlton turned up to play a home game in 1890. A square foot of turf had been removed from the middle of the wicket. The hole was filled in and the game completed. Subsequent inquiries revealed the Ca

usewayside man who had been the culprit. When challenged:’I did it for a lark’ was his explanation. No-one believed him. ‘It’s the God’s truth, if you dinna believe me, come alang to ma hoose’. There, at the foot of a cage in which he kept his lark, was the missing turf!

In 1904, Carlton moved to its present ground. The land was covered with trees and had previously been used to pasture sheep and cattle. The area belonged not to the large, imposing Victorian building that dominates the northern boundary of the ground, but the smaller house on Edinburgh ‘s prestigious Dick Place , set back from the north-east corner. The ground was cleared, the pitch prepared over the course of the year, a pavilion constructed and on 17th May 1905, the ground was formally opened with a match against West of Scotland.

After renting the ground for a number of years, N.L. Stevenson, who was to become the dominant personality in the club for the next half-century, persuaded the club to buy the ground in 1925. To raise the purchase price, a series of fairs and carnivals were organised. Carlton has played on the same site ever since. At the time, a biologist, Robert Clark played for Carlton . Amongst his achievements were 4 caps for Scotland , and his survival whilst accompanying Shackleton on his epic Antarctic 1914-1917 expedition, Clark being one of the party left on Elephant Island as Shackleton rowed to South Georgia to seek rescue. There are stories of Clark regaling his fellow cricketers with tales of his Antarctic exploits upon his return to (slightly) warmer climes.

In the early 1920’s, a Scottish newspaper attempted to start a Scottish Cricket Championship on similar lines to the Rugby Club Championship, collating results from matches between the leading cricket sides. Carlton was adjudged the first winner with 14 victories and only one loss in 18 matches. Press comments noted that Carlton ‘won its distinction without professional assistance’.

At this time, Carlton undertook ‘tours’ of the North of Scotland, regular features being matches at Glamis Castle and at Balmoral Castle against the Royal Household XI when the Royal family were in residence. Indeed, the club was invited to play the Royal Household at Windsor in 1934 in the presence of King George V. Subsequently, N.L. Stevenson was made an honorary life member of the Royal Household Cricket Club. It was in this year that N.L. Stevenson won the toss on 28 out of 31 matches played in that season (of which the team lost only once and drew three times).

N.L. Stevenson continued to run the club, assuming the roles of 1st XI captain and organiser. It was to the club’s good fortune that he was a dentist by profession when, in 1930, Australia visited Edinburgh . Invited for dinner by Dr Stevenson, the Australian captain, W.M.Woodfull, developed toothache. Dr Stevenson opened his surgery in the middle of the night and removed more of Woodfull’s teeth than Scotland ‘s bowlers had his stumps.

1936 also featured a match against Heart of Midlothian Football Club. The ‘Jam Tarts’ made the game much closer than a football match between the clubs would have been; batting first and scoring enough runs to ensure Carlton had to play out time for an honourable draw. The match is thought to have been arranged with the assistance of Thomas Roland Crosskey, the club’s Sussex-born professional, who played professional football for Hearts at the time. The 1930s were a successful period for the club, with strong amateur players as well as Crosskey’s professional expertise.

During the early years of the Second World War, Carlton continued to play cricket, mostly as recreation for servicemen stationed in the area. Later, the ground was used for target practice, and for many years after, groundsmen would dig up bullets and shells in the course of their work.

The late 40’s and 50’s saw cricket return to Grange Loan, and the club, still under the firm hand of Dr N.L. Stevenson, continued to flourish. However, his period as the driving force behind Carlton Cricket Club was drawing to a close. In 1959 a young geologist, Alun Davies, moved from south Wales to work in Grange Terrace. It was over two years later that he noticed a cricket club playing only one street away from his office and soon became involved. A medium-paced right-arm bowler and a more than useful middle-order, left-handed batsman, he became the captain of the 1st XI, and went on to become the driving force at Grange Loan, noted not just for his exploits on the field, but for his blunt down-to-earth Welsh wisdom serving in various capacities in the administration of both the East League and the SCU.

In recent years, Carlton has remained one of the top teams in the country. Since the inception of the East League in 1953, Carlton had retained its place in the top division, although gaining the reputation of being the perennial runners-up. However all that was forgotten in 1988, the club’s 125th anniversary year. Carlton won the East League for the first time, the Masterton Trophy (for the sixth time) and were the Famous Grouse Team of the Year in Scotland . This was the last time any all-amateur team achieved this level of success.

For many years, the club was well served by a gaggle of Swans, Alan, Richard and, occasionally, Chic. Richard Swan went on to play for Scotland and set a record for the number of matches as captain. Jim Govan joined the club in 1986, going on to join Richard in the Scotland side before moving south to play professionally with Northants, returning later to play for Carlton once again.

By then, Peter Nettleton, for many years the 1st XI wicket-keeper, had started junior coaching sessions. Followed on by David Watts and Gavin Scott, Carlton became a hot-bed of junior cricket in Edinburgh , a situation that continues to this day with the unstinting efforts of Carlton’s coaches.

The club took the major step of renting the pavilion to a children’s nursery, providing year-round income, generating much-needed funds to support the activities of the club in an era where employing a professional, for playing and coaching became a necessity.

cottish National Cricket League was instigated in 1999 with Carlton among ten sides qualifying for a place in the Premier League. By then, Carlton had engaged the services of South African all-rounder Cedric English, who became a permanent fixture at Grange Loan, and in the Scotland side when he became a naturalised ‘Jockbok’

2003 was the last season in the old pavilion as then-President Hugh Parker’s unstinting efforts paid off. After years of struggle, plans for a new pavilion were finally approved and in 2004, the old pavilion was demolished and the new building was completed.

In the years that followed, Carlton maintained their position in the Premier League and in 2007 had one of their best ever seasons, competing at the top end of the league, reaching the Scottish Cup Final and winning the Masterton trophy. Tthe club also cemented their reputation as the country’s leading T20 specialists by winning the Murgitroyd National T20 Trophy in both 2008 and 2010.

2011, however, saw Carlton’s finest ever year. As well as winning the Murgitroyd National T20 Trophy for the third time in four years, the club finished top of the Scottish National Cricket League for the first time ever. 2012 saw another important first for the club with the launch of the Carlton Women’s team. Led by Helen Blair, they won the Scottish Cup in their second year and completed the double of the national league title and Scottish Cup the year after.

In 2016 Carlton became the first club ever to be national champions in both the men’s and women’s game, and in 2017 Carlton finally captured the big prize that had previously eluded them – the Scottish Cup.